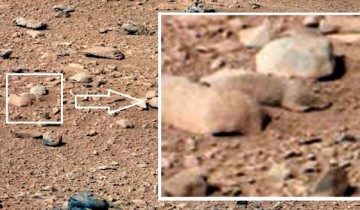 Recent images from NASA’s Mars rover, aptly named ‘Curiosity’ show what appears to be a rodent living on the planet.

In a post from UFO Sightings Daily, writer Scott C Waring described the creature he spotted in one of the photographs,

“Note its lighter color upper and lower eyelids, its nose and cheek areas, its ear, its front leg and stomach. Looks similar to a squirrel camouflaged in the stones and sand by its colors,” he wrote. “Hey, who doesn’t love squirrels, right?”

Unfortunately, further investigation discovered that the rodent turned out to just be a rock that looks like a rat. How disappointing…no need for pest control there then!

This isn’t the first time a NASA rover has picked up what was thought to be some kind of life form. In 1976, ‘Viking 1’ picked up images of what looked like a human head. Information from NASA stated,

”huge rock formation … which resembles a human head … formed by shadows giving the illusion of eyes, nose and mouth.”

The “face” caused massive publicity and it wasn’t until 2001 that a final image was captured that confirmed it was nothing more than a rock formation.

Although ‘Curiosity’ has been roaming Mars for nearly a year, no life forms have been discovered (not even a rat, apparently).

If you have discovered a rat in your home (and it’s definitely not just a rock!) then contact us today. We offer pest control in London and across Kent, specialising in mice and rat removal services for both residential and commercial properties.